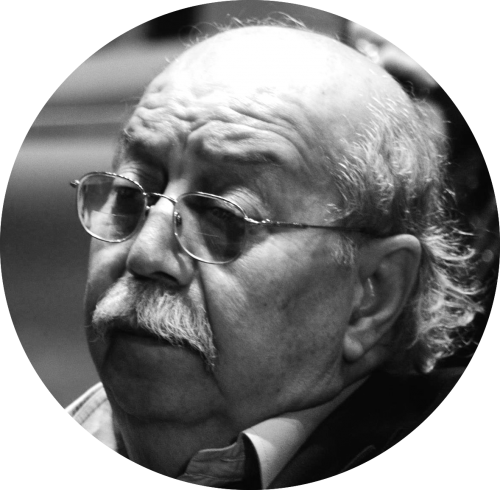 Syrian musician Nouri Iskandar (1938; Deir al-Zur, Syria) is considered one of the most important researchers, documenters and composers of old Syrian music, and is one of the most prominent live resources about Syriac folkloric and church music and its history, which goes back a hundred years to the Raha and Deir al-Zaafaran schools.

As a young deacon, Iskandar found in front of him the forgotten treasures of Syrian music so, having researched it academically, he decided to revive its tunes. His research allowed him to find the appropriate blends – albeit limited at first – to free the Arabic melodic phrase from its traditionalist forms. Nouri Iskandar devoted himself to writing oriental music with the spirit of the era after his in-depth study of contemporary musical experiments which he didn’t see as good enough to be able to lead to the composition of a symphony capable of preserving the essence of oriental music and being equal to international symphonies.

Nouri Iskandar’s uniqueness lies in his ability to draw his listener into a world that combines church hymns, and ritual Islamic eulogies and songs with rare brilliance, without eliminating the popular folkloric elements.

Iskander studied in Aleppo with Fatishe Hermian, the great Syrian jazz musician. This opened up opportunities for written musical experiments in non-traditional ways, rising from the origins of the oriental ‘maqam’ without being restricted to its traditional rules and methods. The aim of these experiments was to create new content with new musical forms in order to achieve rich interaction between these musical ideas and phrases, through dramatic and dynamic dialogue. These experiments made use of “Polyphony – Harmony” as an analytical study and sometimes used sounds suitable for the spirit of the oriental ‘maqam’, such as harmonic chords.

He works to find non-traditional musical forms suitable for the oriental maqamat but following new harmonic blends, whilst preserving their spirit and content and avoiding blind imitation of the West. Thus he aims to create a new music in which there is a new, meaningful place for thought, philosophy and poetry in music.

He experimented with contemporary forms to recreate these ‘maqamat’ using oud, cello and violin and finally producing a record, Oud Concerto, and then String Trio.

Between 1996 and 2002 he was director of the Arab Institute of Music in Aleppo. Iskandar has formed several choirs, the most important of which is “Qowqweyo – Al-Fakharoon”, which has performed, in Syria and some European capitals, Syriac tunes typical of the Syriac Orthodox Church. He has also worked on soundtracks for a number of cinematic films and television series. Nouri has written two books: Bayt Kazoo – The Tradition of Rahwiya Tunes, and Bayt Kazoo – The Tradition of Deir al-Zaafaran and its Followers.

Among Nouri Iskandar outstanding works: Dialogue of Love, 1995, which was in the form of Islamic religious chants and unique Syriac hymns; music for the Greek play Bacchus’ Slaves; Revelations and Vision, which formed the crowning pieces for his blending of oriental music with classical techniques; Khattama for an orchestra and choir – a poem by the great poet Hussein Hamza; Moans, 2003; The Giver of Love: an Introduction to Sufism, 2007.