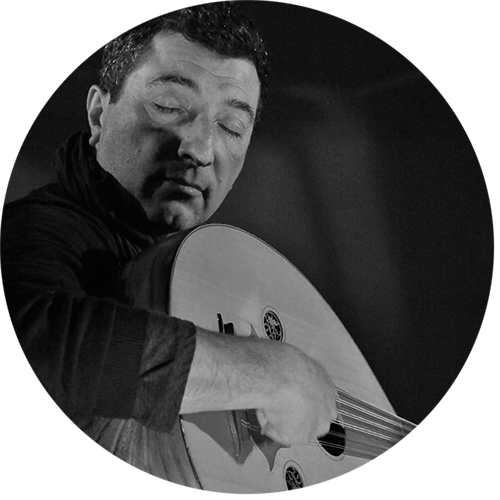 Fawaz Baker is a musician, composer, and scholar hailing from Syria and currently living in Paris, France. A former director of the Aleppo conservatory, Baker is also a musicologist and architect. He plays the Oud and the double bass in several ensembles in France, including his own, and previously performed in Syria with Nouri Iskandar’s ensemble. Beginning his career in Syria as a disciple of several masters of Arabic and Turkish music, he went on to train at the Lyon School of jazz, where he studied improvisation with the intention of exploring its possibilities in traditional music.

A world-class scholar on the geometry of intervals in Oriental music, he has published several articles and given talks on the topic in Syria, Egypt, France and Italy. He co-founded the first online portal dedicated to current research on modal music and heads the Middle Eastern chapter. A passionate teacher, Fawaz Baker shares his knowledge with the next generation of musicians, whether in Europe or in the Middle East, where he acts as Artistic director of Work4hope, an organization bringing music lessons to children refugees of war, that has branches in Lebanon and Jordan.

He founded the Fawaz Baker Ensemble with seven other Syrian musicians last year, giving a memorable concert at the Institut du Monde Arabe in Paris that showcased Aleppo’s extraordinary musical diversity. He was particularly inspired by the Sufi brotherhoods’ traditional Zikr ceremonies and their distinct « maqâms » – intervals of various durations – who draw on an ancient wisdom to catch the energy of the present time. His recent projects include a commission to compose a Quintet for the Paris Chamber Orchestra, and a Quartet for the Jazz Conservatory of Paris, both of which he performed at City Hall to raving audiences. Fawaz Baker has recently been named Artistic Programmer of the Quartz musical hall in Brest, France for the next three years.